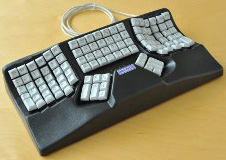 Your keyboard is arguably the most important part of your computer because it is the interaction point. If your keyboard isn't optimised you tend to work slower, make more mistakes, need more breaks and enjoy your work less.

The Maltron Ergonomic Keyboard is the premier ergonomic keyboard available today. Patterned after a design inspired by the Skills Analyst, Mrs. Lillian G. Malt, and the creative work of Stephen Hobday. The Maltron Keyboard offers relief for RSI or Carpal Tunnel Syndrome sufferers and increases keyboarding speed and accuracy using either the QWERTY or MALTRON layouts.

The Dual Handed Keyboard is the first to offer the opportunity for individuals to learn a superior touch system on a keyboard that is portable and can be connected to all modern PC or Macintosh computers.

Both QWERTY and the alternative MALTRON layouts are available on this single keyboard which has a USB output that plugs into either a PC or a Mac.

Now also available in black with built in trackball!

Statistics of errors for three keyboard layouts are compared. The Maltron, Sholes (Qwerty) and Dvorak (Simplified).

All statistics for Maltron are taken from production work keyed at Scientific Typographers, Long Island, New York, USA, on a Maltron keyboard with the Maltron layout. They also reported a 10% productivity increase. All statistics for Sholes (Qwerty) and Dvorak are from "Typewriting Behaviour" by Dvorak, Merrick, Dealey and Ford, published in 1936 by the American Book Company.

Analysis of over 5 million keystrokes (scientific and mathematical production text) keyed on Maltron layout keyboards, identified 1,139 keyboard errors. This is an error rate of 0.021% or, near enough, 2 errors in 10,000 keystrokes. Substitution errors, 328, were 28.79% of all errors.

The pattern of errors is very different from those on Sholes (Qwerty) and from those on Dvorak (Simplified) keyboards. It is concluded that keyboard layout affects both error rates and error patterns.

It is well known that the Sholes (Qwerty) letter arrangement or layout, was governed by mechanical constraints of the typewriter. Time for the mechanical keybars to move up and down was required. For this reason the most frequently used letters were not placed under the fingers, on the home keys, except for the letter 'A'. Other frequently used letters were placed in less accessible positions to slow down keying.

The Dvorak (Simplified) arranged the ten most frequently used letters on the home row. The locations were governed by the concept that alternate hand keying on standard keyboards is faster than lateral keying. (This concept has not been rigorously tested as most tests have been done on the Sholes (Qwerty) and standard typewriter design. This layout has only three of the 20 commonest digraphs in lateral positions and they are on the Upper row. 'ER, RE' and 'TE' with 'T' in stretch position.) The Sholes design with its vertical rows on a diagonal slant and flat horizontal rows, also inhibits lateral keying.

Fastest keying on Maltron with its sculptured shape to fit finger lengths, is on commonest digraphs where these occur laterally and especially when placed under the middle and index fingers of both hands. Experiments on transmission of information in the nervous system (Efron 1963) show a 2 - 6 m.sec longer delay to the right hemisphere stimuli. If such a delay exists it appears reasonable to conjecture that transmissions that cross the corpus callosum, which must occur with contra-lateral sequences, will each be subject to the 2 - 6 m.sec delay.

As vowels are the highest source of errors in reading and spelling, theoretically, it could be anticipated that with such a layout a higher than average error rate an those vowels and consonants under adjacent fingers could be anticipated. According to statistics available in 'Typewriting Behavior' (pages 504/505) this did occur.

The Maltron letter layout has three important objectives. First to place the most frequently used characters on the home keys, that is on the keys directly under the fingers and thumbs to minimize finger travel and stretch over the keyboard. Second to arrange all letters so that known keying errors and language confusions would be avoided. With such an arrangement it was expected that the most frequent error patterns observed on both Sholes (Qwerty) and Dvorak (Simplified) would be aided. Third, where possible, after allowing for the two objectives already stated, to allow for lateral keying, both adjacent and spaced.

The extent to which the objective of avoiding errors has been achieved is discussed and shown in Tables given below. Errors on the Maltron with respect to their previous keying on standard Qwerty layout are remarkably low. Many operators saw a reduction of 10 to 1 from their previous production error rate when keying on Qwerty. Patterns of errors on Maltron are also very different from those on Sholes and Dvorak.

All figures for Sholes and Dvorak errors were taken from "Typewriting Behavior" pages 504/505. A substitution error occurs when one letter is keyed instead of another. That is, incorrect letters are keyed, generally because incorrect fingers are used: because there is a language letter confusion: or because fingers stray from correct positions. For example 'A' is keyed for 'O' resulting in 'shap' instead of 'shop'.

Total error and keystroke count are not available for errors on the Dvorak layout. (Op.cit)

Any appreciation of causes of errors must consider single letter frequencies as well as errors in frequent digraphs. To allow for easier and faster keying the positioning of the most frequently used letters is important.

A computer printout of the Kucera and Francis 'Computational Analysis of Present-Day American English'* was used to provide counts for mono-di- and up to hexa-graph frequencies in 1,014,232 words in text. 4,807,066 characters in total, of which 4,761,306 were alpha characters.

To obtain the error counts for Maltron, errors were located through a DEC "Runspell" program on 5,326,470 characters. "Runspell" is accurate to 96%, and locates all errors except where a recognized word results. e.g. 'there' for 'their', or 'than' for 'that'. With a 96% accuracy level in error location "Runspell" is more accurate than manual methods. A total of 1,139 errors, (0.021% of the keystrokes analyzed) were located on Maltron keying. Of these 328 were substitution errors, 28.80% of all errors, and 0.006% of the total keystrokes analyzed. 63,916 substitution errors were given for Sholes, and 3,329 for Dvorak. The total number of keystrokes in which the # substitution errors occurred is not given for Sholes and Dvorak layouts.

The ten most frequently used letters in English text according to Kucera are:
E T A O I N S R H L

The home rows for Maltron and Dvorak have nine of these letters in common,
E T A O D I N S H

Qwerty has three of them,
A D S

Therefore, if layout did not affect error rate one would expect the error rates for Maltron and Dvorak to follow much the same pattern: they have nine and eight respectively, of the ten most frequently used letters on the home rows. However, the rank order for the ten letters most frequently involved in substitution errors on each of the three layouts shows significant differences.
Maltron C R (AST) (DI) (LP) E (AST equal third, DI equal sixth, LP equal eighth) Sholes E R S O D I T A F N Dvorak O A E T W R H S I U

'E', the most used letter is the 10th most frequent error on Maltron. It has the highest error rank on Sholes, and is third highest on Dvorak. In other words, Maltron avoids high error rates on three of the ten most frequently used letters, 'O,N,H'; a very different picture from Dvorak on which error frequencies closely approximate the commonest letter frequencies (only excepting 'L') and on Sholes where 'H', 'L' and 'U' are excepted. Substitution error letters common to ail three keyboards, in varying rank order, are 'A,E,I,R,S,T'.

It may be deduced from these results that letter layout does affect error patterns very significantly.

It appears that letter location and especially adjacent letter location does affect error frequencies However the relative error rates must always he considered in reference to the Rank Order of the E~ in ordinary English orthography.

These tables show that Substitution errors are not random on Maltron and Dvorak. They do appear to be almost random on Sholes, perhaps reflecting its random layout. Error patterns are different on the three layouts. The highest substitution errors do not occur or involve the same letters nor even the same finger movements.

Of the 650 possible substitutions, Maltron has 134, Sholes (Qwerty) has 648 and Dvorak has 325. This, of course, may be because some twenty times as many errors are listed for Sholes as for Dvorak and some ten times as many for Dvorak as for Maltron. The number of keystrokes in which these errors occurred is known only for Maltron, 5,326,470 on production work.

The table below shows the five pairs of letters most frequently involved in substitution errors on three keyboards. The finger/s used and the row on which the letters occur are listed. (Fingers numbered left to right 1 - 10)

Adjacent and contra-lateral substitution errors
Home Row only
Maltron layout entirely avoids adjacent errors on the home row.
Qwerty has the adjacent error 'S' far 'D' on the home row. 'S' is the only high frequency letter directly under the fingers on the Qwerty home row. Dvorak has a high error frequency on all the vowels. These are all adjacent on the home row under the fingers of the left hand.
All Rows
On Maltron two adjacent errors occur. Both on the left upper row.
'P' for 'Y' and 'Y' for 'C'
and three single finger errors,
'R' for 'L', 'C' for 'S' and 'I' for 'Y'
all an the home and upper rows.
On Qwerty there are two adjacent errors. On the left upper row.
'R' far 'E' and 'R' far 'T'
and one contra-lateral error, the very frequently used vowels
'E' far 'I' on the upper row.
Dvorak has one single finger error,
'N' for 'R' on the right home and upper rows.

The frequency of substitution errors does not conform to simple letter frequency nor to row position. Maltron has only five home row keys amongst its ten most frequent errors, Sholes has eight, and Dvorak has all ten. This implies that character layout does affect error rates.

The letter arrangement an Maltron not only results in a very low error rate, but also avoids three of the most frequently used letters 'O,N,H', among the 10 highest error rates. Sholes does likewise an two, 'H' and 'L', while Dvorak avoids only the 'L' among the 10.

It must be remembered that the actual error rate on Maltron is substantially lower than for either Dvorak or Maltron. As the total keystroke count for the two graphs used for the substitution error comparison analysis is not provided by Dvorak et al, exact comparison of absolute error percentages cannot be made.